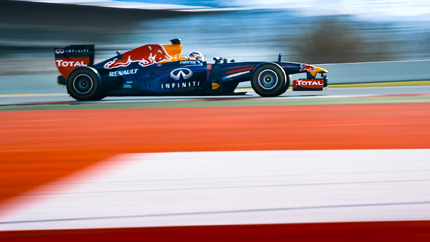 Early morning at the race track. An aggressive engine sound gradually emerges from the stillness. A flock of magpies cackle as they rise from a stack of tyres. The racing car passes at close quarters. Nose, tyres and wings are mounted with the ratchet and pneumatic screwdriver. Sebastian Vettel inserts his earplugs. The entire noise of the pit garage is muted and sounds as if muffled by cotton wool.

The suspension of the clips mainly builds up through the noises and sound design. The clips have been specially produced to showcase the new cinema sound system "Dolby Atmos": in movie theatres the audio experience takes full and best effect.

"Dolby Atmos" enables a three-dimensional sound arrangement. Sounds can be moved through the movie theatre in virtually all directions. For the first time, each individiual speaker can be controlled separately, with additional speakers installed in the ceiling of the cinema and channel feeds for each speakers.

In addition to footage from the 2013 launch clip "Rhythm of the Factory", we have also used shots from the 2013 RBR filming day in Barcelona.

Special thanks to "Whisper Films" (London) as well as "Prism" and "Munderbar!" (London) for providing this footage.