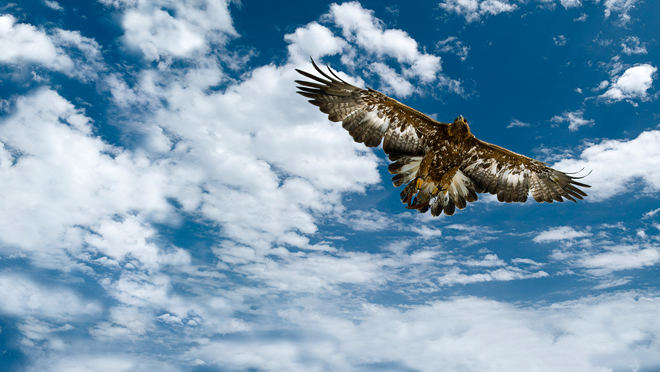 The Eagle Cam - developed by Peter Clausen Film & TV in collaboration with Red Bull Media House and falconer Paul Klima - makes us forget that humans are not born for flying.

Placed on the back of a specially trained eagle the camera delivers a 360° panoramic view from the »king of the sky’s« perspective. We coast over rough mountainsides. Dive playfully through narrow gorges. Reach the most secluded places seemingly without any effort.

Next to the fascinating view, the eagle’s elegant and effective flight aesthetic amazes. We glide effortlessly over pastures and forests until a new destination catches our attention. Two powerful wing beats and a smooth change of direction get us to catch the next updraught, dangerously close to a steep slope, up into stunning heights.

In months of meticulous fiddling work we developed and »tailored« a 4K camera and rigging system for falconer Paul Klima’s stone eagles Bruno and Fritzi. We considered the eagles’ anatomy, head position and radius of wing movements to find the ideal position for the camera on the back. Additionally, the small »backpack rigs« can also be adjusted individually to every eagle so the bird won’t be disturbed in its movements.

The cameras were adjusted accordingly and underwent a radical diet. The weight should be as low as possible, that’s why we removed everything unneccessary.

After several tests with the professionally trained Bruno and Fritzi, we have now built an Eagle Cam system in two versions, 16:9 and 360°.

Our first production included documenting some gorgeous mountain formations in the dolomites. For this, our three-person crew, the two eagles and an experienced mountain guide got dropped off via helicopter at several mountain summits from where the eagles should start their flights. We track the eagles’ flight movements so we can always see where the eagles are heading and in which height.

After flying and landing successfully, depending on the outcome of the camera material the eagles get rewarded, prepared for another flight or they can relax.

Flying over the impressive dolomites on the back of an eagle is a truly elevating feeling and particularly in 360° mode simply fascinating - for a short while you have a real feeling of being weightless.